The Israeli economy continues to show resilience in the face of growing political isolation and the spread of terrorism around the world. This small, 66 year-old developed nation shows growth other nations are unable to match. Here’s why:

Israeli GDP grew at seasonally adjusted 7.2% in the fourth quarter of 2014. According to Tel Aviv-based Meitav Dash Investment House, “The economy is certainly not in slowdown or recession, but growing at a quite high rate of 3% [annually] - that rate would arouse the envy of many countries in the world.” According to Alex Zabezhinsky, chief economist at Meitav Dash, this growth rate “does not represent the [actual] state of the economy. [This] growth is attributed to several factors whose influence are transitory.” The economist indicates that following Operation Protective Edge in the summer of 2014, there was accelerated economic activity to compensate for the stagnation during the war. A similar phenomenon has been seen in the past, for example, after the Second Lebanon War. Secondly, the tax regime change created a considerable increase in the purchases of vehicles by businesses and by private consumers. Thirdly, increased government consumption in the second half of the year is believed to be related at least in part to replenishing equipment after the war. Based on data from the Israeli Central Bureau of Statistics, the corporate sector's GDP, recorded in the fourth quarter, was even higher growth - an annual rate of 8.8%. 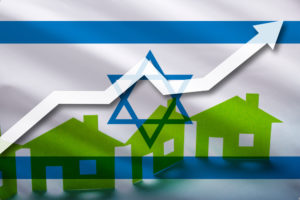 Israeli house prices continue to rise. Having never experienced a sub-prime crisis as the rest of the world did in the Great Recession of 2008-2009, economists wonder if a price correction is in sight. The price of housing in Israel is one of the highest in the world. It costs an average of 140 monthly salaries (almost 12 years) to buy an apartment in Israel. Because of potential future VAT-reduction legislation, there was stagnation in the real estate sector during Q4, 2014. The legislation was scuttled. Investments in fixed assets (investments in residential housing and the construction, equipment, and vehicles sectors) were down by an annualized 1.9% in the second half of 2014, following a 6.8% drop in the first half. Bank of Israel Governor Karnit Flug says, “If construction continues at the pace set in 2013 and 2014, in other words 44,000 building starts, and if it includes high-demand areas, then there is a reasonable chance that we'll see stability and even the beginning of a drop in prices.” Despite the rhetoric, house prices continue to rise. According to the latest Bank of Israel Monetary Committee, in the 12 months ending in November, 2014, house prices increased by 5.8 percent. The trend of decline in the number of transactions has continued in recent months, though it was concentrated in the purchases of second-hand homes. The number of new home purchases, particularly those in the price range that would have been included in the zero-VAT plan, has increased sharply since September (when it became clear that the zero-VAT plan wouldn’t happen), and between August and November there was a moderate decline in the number of new homes available for sale. The pace of building starts and building completions remains relatively high.

While Israel ranks #1 globally for inflation stability, for much of 2014, inflation was lower than expected (sub-1%). Then in November, 2014 and January, 2015, the month-over-month CPI readings were negative (technically deflation). Dr. Karnit Flug said she believes that inflation will reappear in the second half of 2015, but is “unwilling to even consider raising the interest rate.” Meitav Dash’s Zabezhinsky estimates inflation to be only 0.5% over the next 12 months, with interest rates rising only 0.25% to 0.5% during that period.

Dr. Flug indicates that the banking system is more resilient than it was on the eve of the global credit crisis, but the banks are still too big to fail. The largest bank, Bank Leumi, is embroiled in controversy surrounding an investigation into its assistance to U.S. customers to evade American taxes. Bank stocks, which had been up as much as 10% in 2014, have been tumbling in the past six months (not withstanding a 3% jump in mid-February based on improved GDP readings). Despite this, CPI-linked Israeli bank bonds held stable and even gained ground during that time. For U.S. investors adding funds to their Israeli brokerage accounts, the shekel-dollar exchange rate is key to gaining the most shekels with the same USD. The second half of 2014 was uncharacteristic of the longer-term trend of shekel strengthening. The U.S. dollar strengthened against other world currencies, including the shekel. By year-end, one USD could purchase 14% more shekels. Having met resistance at 4.0 NIS/$, the shekel has regained strength against the dollar by 3%, and may indicate a trend reversal. Dollar-heavy investors should strongly consider converting currency to shekels at this time, while the dollar is still relatively strong.

The Tel Aviv 100 stock index gained 7.5% in 2014, and continues on a similar pace in 2015. After having uncharacteristically low returns in 2014, solid Israeli corporate bond indices began 2015 with gains of almost 2% (as of mid-February). Of particular note in 2015 so far, is the Tel Aviv Real Estate 15 stock index, which has returned 9% in just the first month and a half of this year. The small-cap stock index has also outperformed, with a 6.9% gain so far.

The Bank of Israel expects the total government deficit in 2015 to be slightly under the 2.5 percent of GDP target ceiling. According to a Bank of Israel’s Press Release this month, government expenditures in 2014 were slightly lower than the original budget, despite the NIS 7 billion supplement to the defense budget due to the direct costs of Operation Protective Edge (Gaza War).

Israel’s largest investment firm indicates that consumer and business sentiment in the economy continues to improve. Businesses expect an increase in recruitment and in work activity. There was particularly marked improvement in construction and industry. Data on manufacturing exports shows significant growth mainly in the pharmaceutical and electronic components areas. The increase in tax revenues is indicative of an improvement in economic activity. Meitav Dash expects the next elected government not to need to take significant fiscal restraining steps. The international rating agency Standard & Poor’s (S&P) confirmed its rating of Israel. The company noted a drop in international support for Israel could harm future rankings. In light of the above, Meitav recommends corporate bonds with average maturity of about three years, with preference on floating-rate bonds over short-term shekel bonds.

In summary, the Israeli economy has shown solid growth and sound fundamentals. The capital market, while challenged by multiple factors, continues to provide a good way to invest in Israeli innovation and ingenuity. The current exchange rate provides a comfortable entry point for those with U.S. dollars.  Sources: Globes, Meitav Dash, Bank of Israel, Calcalist, Trading Economics, Israeli Central Bureau of Statistics The above is the opinion of the writer and should not be taken as financial advice, nor is it a commitment to achieve any future returns. Past performance does not ensure similar future returns. At the time of authorship, the author may or may not hold securities mentioned in the article. This publication does not constitute an offer to purchase, sell or hold securities or units in a fund, and is not a substitute for investment and/or tax advice that takes into account the special needs of each person. Please consult a professional investment advisor concerning your specific situation before making personal financial decisions.