Israel is famous for being a Start Up Nation, creating product used worldwide in various fields. From biotech to irrigation technology, from computer chips to Artificial Intelligence. The breakthroughs in many areas have blessed consumers around the globe.

Another aspect of Israeli society, however, is not as widely celebrated in the western world. These are so called collective communities you may know in Hebrew as kibbutzim. Going back to the founding days of the state of Israel, these essentially socialist settlements focused on a communal life. In time, capitalist elements were embraced by the broader society, and the kibbutz movement began to decline. However, it remains present today and continues making its contribution to the Israeli economy.

Some kibbutzim, originally focused on the agricultural sector. Now, they entered the business world by providing products that stretch far beyond Israel's borders. In fact, there are currently 20 multinational businesses operating on kibbutzim today. One such community is kibbutz Yizre'el. Kibbutz Yizre'el is home to Maytronics Ltd, which serves as its main source of income. Maytronics' specialty is development, production, distribution and technical support for swimming pool equipment, specifically robots for cleaning swimming pools. In addition, it produces alarms for protecting swimmers from drowning and other products for treating swimming pool water. Over the years, the company's products have proved to be very successful. Its robots are currently used by approximately a third of public pools. Globally, they are used in almost half of all private pools.

Innovation In Israel In Action

However, this was not always a case. The story of Maytronics originated back in 1982. A member of the kibbutz saw commercial sense in developing cleaning robots in distant South Africa. He pitched this idea to the rest of the kibbutz to buy a patent and develop it further. At the time, the kibbutz was going through a difficult financial situation. Their combined debt stood at around 125 million shekels. In other words, the kibbutz’s total cashflow was not sufficient to pay the interest. Despite this, the members of the community agreed to Hirsh's wild idea, and forged ahead. Twenty years later, the company went public and is currently traded on the Tel Aviv Stock Exchange.

Earlier last month, Mayronics made history by being the first kibbutz-owned company on Israel’s major stock market index (Tel Aviv-35). The TA-35 consists of the country’s 35 largest publicly-traded companies. Kibbutz Yisre'el is still a majority holder of the company, whose market cap is over 5 billion shekels ($1.6 billion USD) in August. To put it differently, the members of the kibbutz share between themselves a whopping 3 billion shekels. Ironically, Yizre'el is one of the last communities that remains faithful to its socialist founding ideology. Regardless of their position within the community, company corporate ladder or level of income, each member gives 100% of his salary to the kibbutz. In return, each member receives a stipend.

The Kibbutz Makes a Bold Choice

Having said all that, the kibbutz came close to losing this vast wealth. One of the world leaders in the industry approached them with an offer to buy a controlling stake. Nine years ago, in 2011, Hayward's offer of NIS 180 million for a 67% stake, an extremely attractive premium. 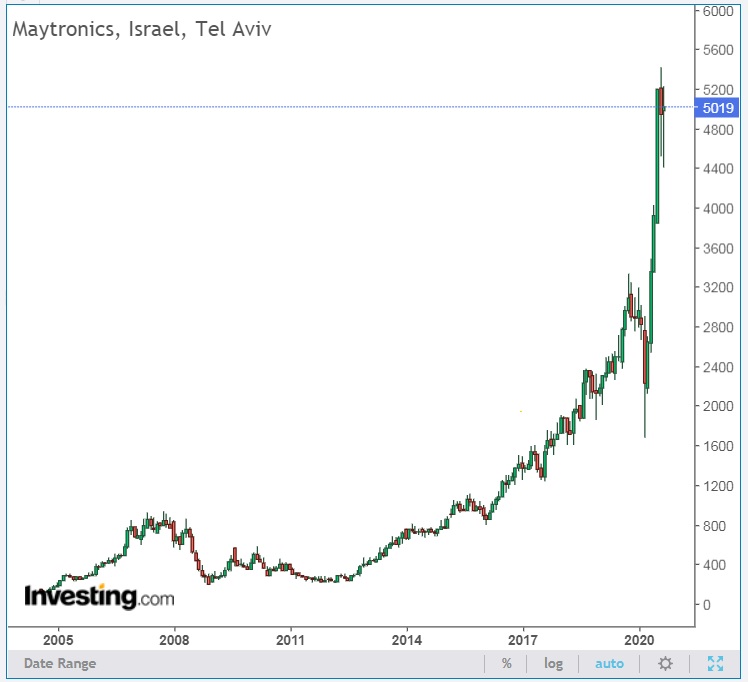 The Israeli company's valuation stood at NIS 345 million. Not surprisingly, the kibbutz member said no to this lucrative offer after an emotional meeting . Now, looking back, that decision was wise as Maytronics’ value has skyrocketed. Since then, the company's shares ascended by an amazing 2,600%!

Back in 2017 the kibbutz sold 10% of its shares for NIS 235 million. On August 20, 2020 they sold another 3%, raising the total of NIS 385 million from both transactions. Even after reducing their stake to 54%, Yizre'el remains in control of its flagship company.

This recent event has only reminded its owners that they made the right decision not to sell its stake a few years ago. Especially, as two-thirds of its annual profits is distributed as dividends.

With the summer period being a busy one for Maytronics, as seasonal private pools sales increase, the company must adjust to accommodate incoming orders. However, this year delivered another boost as Coronavirus pushed people to stay at home. This served as an incentive for those who can afford to build a backyard swimming pool. During the pandemic, as stated by Reuters, demand for pools reached unprecedented levels around the globe. Manufacturers and distributors are scrambling to meet a wave of demand as consumers stay at home and avoid the virus.

Consequently, Maytronics has been enjoying a significantly higher level of sales of its leading product, the pool cleaning robot called "Dolphin". Even with a favorable environment like this year, the potential for growth remains high due to the fact that most of the pools remain serviced manually. According to Maytronic's CEO Eyal Tryber, there are approximately 20 million pools globally that do not have robots at all. Therefore, the company remains optimistic as it sees plenty of room for growth. From 32% of the total market share back in 2010, the company has climbed up to 48% last year.

The company has been exporting its products around the world for many years now. Currently, the European market is the largest in terms of revenue generation (45% of total sales last year). The United States is second (39%), and starting in 2011, the market presence Australia and New Zealand (11%) grows at a steady pace. 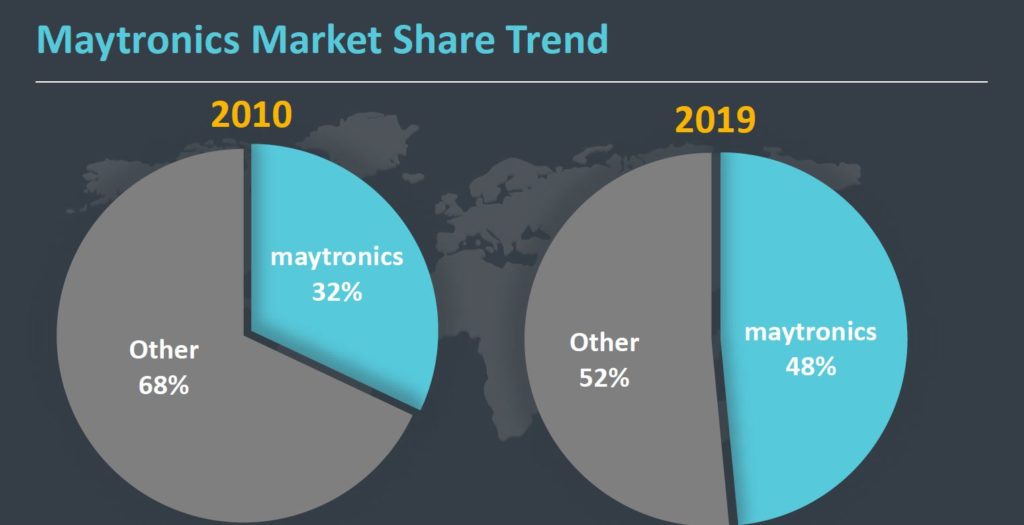 The Company Still Grows In Size And Innovation

Maytronics sells hundreds of thousands of "Dolphin" units each year. But, it is not only robots that keep customers choosing the Israeli firm. Alongside its highly efficient device, the company markets its anti-drowning alarm system together with pool covers. The management takes safety issues seriously and sees it as one of the potential engines for growth. Accordingly, Maytronics had to expand its production facilities beyond its plant at Yisre'el. In fact, there are two more plants – one in La Ciotat in France and another one in the Upper Galilee in Israel. This way the company is able to cope with any increase in demand when needed. Finally, Maytronics does not rest on its laurels. They remain committed to continual heavy investment in its Research & Development to keep its cutting-edge advantage over its competitors.

It is fascinating to see, how someone's idea and perseverance in developing a simple product such as a swimming pool robot, could result in a multinational business that currently exports 98% of its products worldwide. And maybe this is why a firm from a small Israeli kibbutz is managing not only to outgrow its local market, but is now the global leader in its industry.